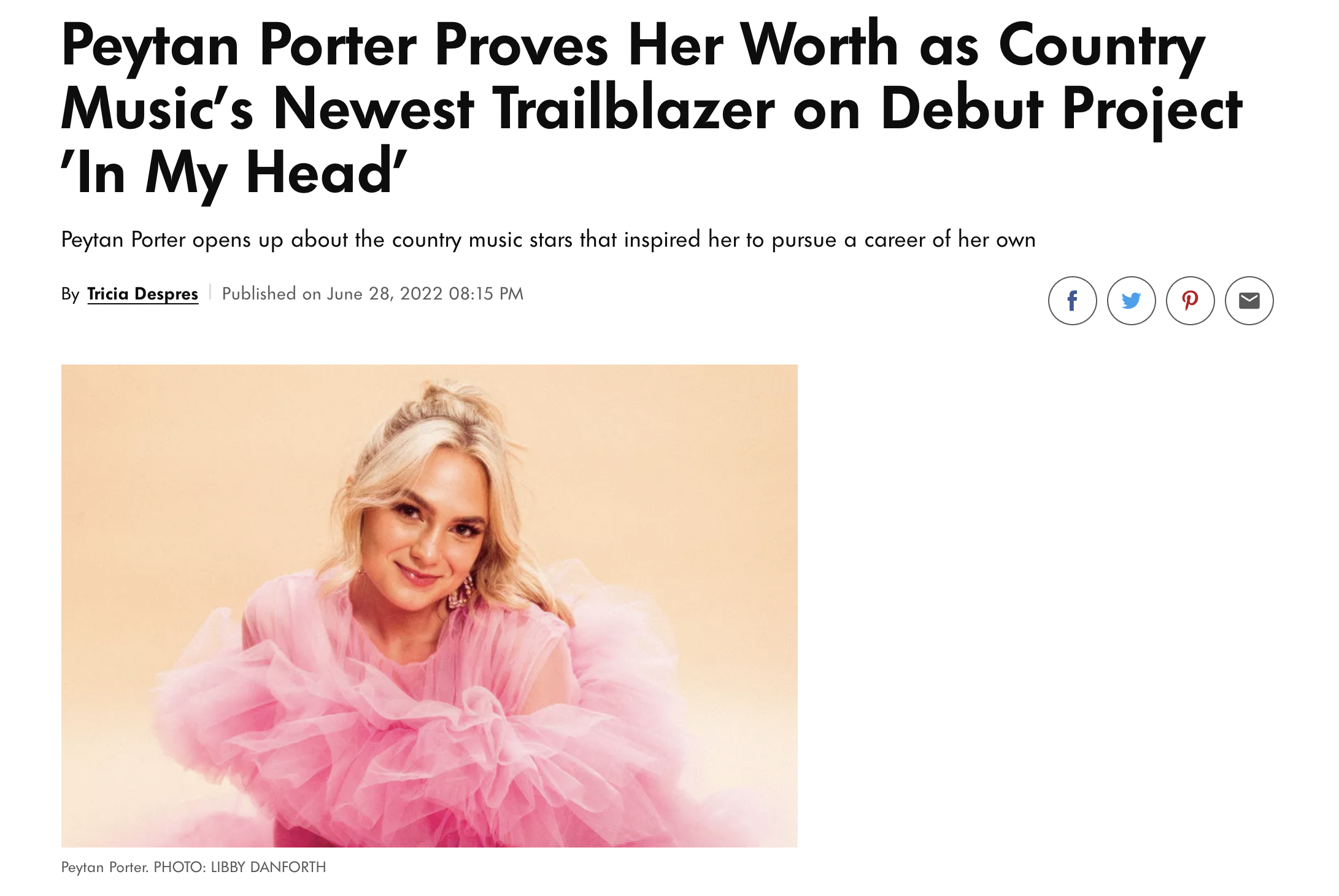 "It was like I was literally caressing heaven," Porter, 24, tells PEOPLE while still coming off the bliss she felt playing CMA Fest a few weeks back. "I felt like this is my ultimate purpose. It felt like I was watching my dreams are coming true."

Indeed, it feels as if magic seeps from the breakthrough singer/songwriter's very pores, whether she is speaking her mind or singing her songs.

And everyone is falling hard for it.

"The thing about CMA Fest was that I had industry people in the audience who've taken care of me since I came to Nashville, but also people in the audience who babysat me as a kid," reflects Porter, who released her debut project In My Head last Friday. "There was also a family there that housed me for two summers for free in Nashville so that I could stay here and try and write songs. It was a surreal moment."

Randy Houser Refuses to Give Up on a Career He Believes In: 'I'm Just Not a Quitter'

Certainly, there has always been a healthy amount of determination burning in the heart of Porter, all the way back to the days when she played basketball as a ponytailed teen who loved country music.

"I remember many times where I would have a basketball game the next day, but I would stay up till 4 a.m. watching (Carrie Underwood's) Blown Away DVD or listening to Taylor Swift records on repeat and reading every single credit," the middle daughter of three girls remembers. "I knew I needed to go to sleep, but I always felt that this was more important than that game tomorrow."

Porter was also the artsy one of the family who started singing around her hometown of Dawsonville, Georgia, when she was just 12 years old.

"I sang at church, and I wrote songs and sang at a couple festivals," says Porter, who had the Nashville skyline as the wallpaper on her phone back in the day.

And when Kacey Musgraves came out with her album Same Trailer Different Park back in 2013, Porter suddenly began hearing her thoughts come out through another small-town girl's music.

And while folks from home still seem somewhat shocked at the strides Porter has taken since signing her first deal in 2021, the dreamy wordsmith firmly believes she is meant to be in this moment, releasing songs such as the ready-for radio gem "Why We Broke Up."

"I opened for Willie Nelson, and we played 'Why We Broke Up,'" says Porter of the song she wrote with Smith Ahnquist and Sam Bergeson. "And by the time I got off stage, half of my team was convinced that it had to be the next single. Seeing it live made us all realize just what we had on our hands.

Further expanding on the kaleidoscope of colors held within Porter's creative soul is also a bit of a feisty side.

"I've always looked up to artists who say what they want to say about controversial things in their music, but don't necessarily talk about it outside of that," says Porter, whose album cut "First Stone" is as politically charged as she says she will ever get. "I love how Dolly Parton does it. She can bob and weave through anything you throw at her. But if you listen to her songs, you get a better idea of where she stands on things."

But perhaps the cut that, in under four minutes, tells us all we need to know about Porter and what she brings to the country music table is the title track "In My Head."

"I've been talking to this guy, but he didn't call me back quick enough," Porter remembers of the real-life situation she came into the writing room on the day she penned "In My Head" with co-writers Greg Bates and Kat Higgins. "So, I made up this whole scenario of what else he could possibly be doing? And none of it was good." She laughs. "He's hammered. He's doing drugs. He's banging girls."

And then, Porter asked if she could say "hooker" in a song.

"We remembered they said it in 'Three Wooden Crosses,'" she says of the Randy Travis classic. "We knew we were all good."