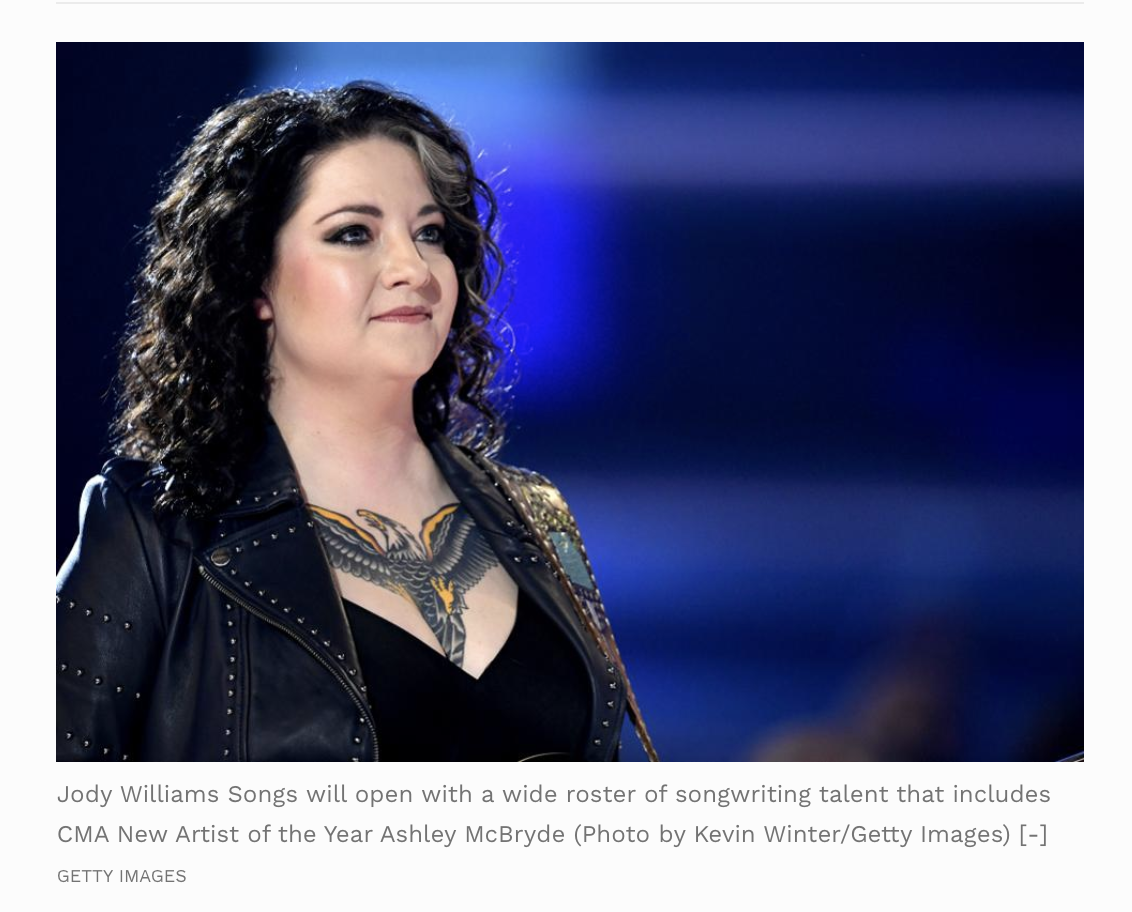 Jody Williams has championed songwriters for over four decades, and now the former BMI executive will take another step in assisting Nashville’s creatives with the launch of Jody Williams Songs. A song-forward publishing company that encourages excellence in songwriting, Jody Williams Songs has partnered with Warner Chappell Music Nashville on the new venture.

“Over the last few years, I really longed to be more involved in direct contact with songwriters and their songs and helping them create an income stream with their music,” Williams tells me. “No matter what market conditions are, songwriters still move to Nashville. I love finding young talent and trying to connect the dots so that there's an income stream made with their music. The climate has never been better.”

Jody Williams Songs will open with a wide roster of songwriting talent that includes CMA New Artist of the Year Ashley McBryde, Nathan Chapman, Jeremy Spillman, and Greg Bates. The company will also represent Pat McLaughlin in a writer management/publishing role and Williams plans to sign three additional artist-writers in the coming months.

Williams’ first five signings are credited to his deep relationships in Nashville. He’s previously worked with each writer throughout his career and tenure at BMI, most recently where he served as VP of Creative in Nashville for 14 years. “I feel so fortunate to be able to start a company like this with people like this. I think we're going to move faster because of it,” he says.

The global pandemic hasn’t slowed business for Williams. He signed all his writers and finalized the paperwork for his joint venture with Warner Chappell a day before Nashville went on lockdown due to Covid-19. Williams and creative director Nina Jenkins have since been working remotely and are looking to find office space on Music Row within the next couple weeks.

Born and raised in Nashville, Williams is a lifelong music fan. He attended the University of Denver for a year and while working at a record store in Colorado, decided to quit college and return to Music City to open up a record store of his own. While his father was supportive, he suggested Williams meet with Frances Preston, former CEO and president at BMI, to discuss a career in music. Preston told Williams, then 20, that there was going to be a recession and people won’t be buying music, and suggested he work in the mailroom at BMI instead. Williams obliged and soon found himself in the halls among artists like Jerry Jeff Walker, Willie Nelson, Waylon Jennings and Jimmy Buffett.

“I had been selling all of their records at this record store in Denver, Colorado, that I worked at. I was also a musician and was in a bluegrass band out there. I played music my whole life. That's really all I ever really wanted to be — a guitar player in somebody’s band and write songs,” Williams recalls. After returning to Nashville and working at BMI in the early 1970s, Williams saw how important the company was to the ecosystem of Nashville’s music industry and he quickly understood what publishing was about.

“I got enamored with the whole idea of publishing and I also realized that my skillset was not in being a musician or a songwriter. My skillset was helping these people navigate the business world because I really had a knack for it. I loved hanging out with songwriters and songwriters seemed to trust me with their songs and to go pitch them,” Williams, an early champion of Eric Church, Maren Morris and Ashley McBryde, says. “I found my niche in being part of the support system for songwriters. I was really lucky to make a career out of it and worked at BMI three different times in my career.”

In addition to his time at BMI, Williams served as president of MCA Music Publishing, Nashville, as well as worked for major publishers including Tree Publishing, Chappell Music, and Screen Gems Music. In 1999, he formed an independent publishing company, Jody Williams Music, where he worked with songwriters like Liz Rose, Josh Turner, and McLaughlin, who he reunites with for Jody Williams Songs.

“Songwriters are a special breed of people. Songwriters create songs that say things that we can’t say, that need to be said. I get inspired by that,” Williams says. “There is a shift towards a more traditional, deeper form of songwriting, and I'm all about that. I think of all the writers that I’ve signed, Ashley is a great example, because her songs exemplify what I’m talking about. It’s a little bit deeper lyric. It doesn't mean that it's not commercial. It doesn't mean that it's not fun … I think we need to get back to putting songs under the microscope and keep making sure that they're the best that they can be.”