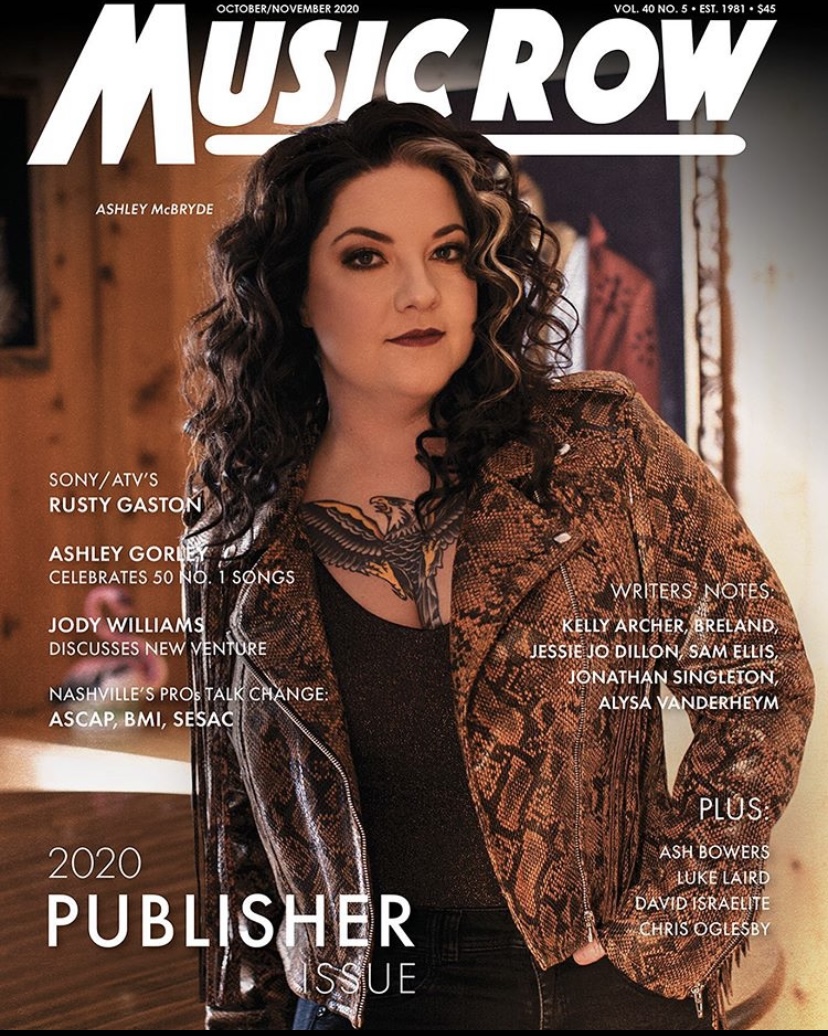 Ashley McBryde is featured on the cover of MusicRow Magazine’s all-new 2020 Publisher Issue.

The Warner Music Nashville artist learned how to sing sad songs in a biker bar off a rural Arkansas highway. The youngest of six, she grew up in Mammoth Spring, Arkansas, a little shy yet always watching. McBryde began writing songs at age 12, however she didn’t fully embrace her voice until college. She moved to Nashville in 2007.

Her 2016 EP Jalopies & Expensive Guitars caught the attention of Eric Church, who brought McBryde onstage for a duet of her “Bible and a .44.” She soon made her Grand Ole Opry debut with the title track off her 2018 major label debut, Girl Going Nowhere, later recognized with a 2019 Grammy nomination for Best Country Album, an Emmy nomination for Outstanding Musical Performance in a Daytime Program for her performance on CBS This Morning Saturday and earning her the titles of ACM New Female Artist, CMT Breakout Artist of the Year and CMA New Artist of the Year, with additional Grammy nominations in 2020 for Best Country Song and Best Country Solo Performance. The album’s title track was named Song of the Year at the 2019 MusicRow Awards, with McBryde winning Breakthrough Artist of the Year.

Her follow-up, Never Will, was released April 3, with Gold-certified lead single “One Night Standards,” a Top 15 song at country radio and already her first No. 1 in Canada, named by NPR as one of the best songs of the year. The hit was also nominated for Song of the Year at this year’s MusicRow Awards. Never Will has already been dubbed one of the best albums of 2020 by Variety, Billboard and SPIN. McBryde was nominated for three 2020 ACM Awards and took home her second and third AIMP Awards earlier this year. This fall, McBryde serves as a CMA Foundation Artist Ambassador; a full-circle moment since moving to Music City for the girl once told she was going nowhere.

In the 2020 Publisher print issue, Round Hill Music songwriter Ashley Gorley discusses hitting the milestone of 50 No. 1 songs and his work as a leading publisher and mentor with his own Tape Room Music. Sony/ATV Music Nashville’s Rusty Gaston talks taking the reins of the music publishing powerhouse during a pandemic, while ASCAP’s Mike Sistad, BMI’s Clay Bradley, and SESAC’s ET Brown and Lydia Schultz discuss their new roles at the respective performing rights organizations. This issue also offers discussions with National Music Publishers’ Association President/CEO David Israelite as well as songwriter/producer Luke Laird, who recently released his first album, titled Music Row. Elsewhere the issue focuses on the careers of Jody Williams (who returns to music publishing with Jody Williams Songs), Wide Open Music and RECORDS Nashville’s Ash Bowers, and BMG’s Chris Oglesby.

Single copies of the 2020 Publisher Issue are available for purchase for $45 at musicrow.com, and are included with yearly memberships at no additional cost. Please note that issues of MusicRow Magazine’s Publisher Issue can only be purchased online, as the MusicRow building is currently closed to the public due to COVID-19.